The command queues consist of a number of separate queues of various sizes that commands can be placed and executed in an orderly fashion. Certain commands take time to execute and have have preconditions that need to be met prior to execution.

Queue 1 is the initialization queue that is automatically executed on the power up sequence after motor configuration is loaded and applied.

Motor commands are always added to the end of a queue. Queue-management commands can empty, copy, and save/load queues and operate on the queue, but are not added to it. Saving a queue means it is serialized to a section of EEPROM on the device. On power cycle, all queues (excluding the Execution Queue) that were previously saved to EEPROM are loaded automatically. You must manually save queues (including Queue 1) prior to power cycle or the commands in the queue are lost.

Commands in the queue allocate a specific amount of memory. Once the queue memory is exhausted, attempting to add more commands to that queue will set an error flag. The queue memory sizes are defined below. 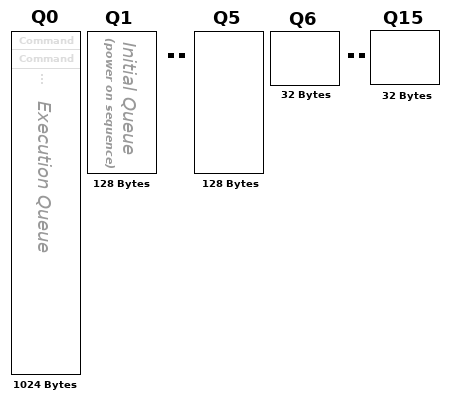 There are three general categories of commands.

Settings and Configuration commands are not added to the queue nor do they alter the queue. They are for things like access point connection, enabling services, and configuring interfaces and typically require rebooting the Wi-Fi Stepper once applied. They do not impact the command queue in any way and are not covered here. See page Settings and Configuration for more on these types of commands.

Queue Management commands act on entire queues as a unit. They are evaluated as soon as they are issued and can be used to save, load, copy queues, etc. For a full list see Queue Management